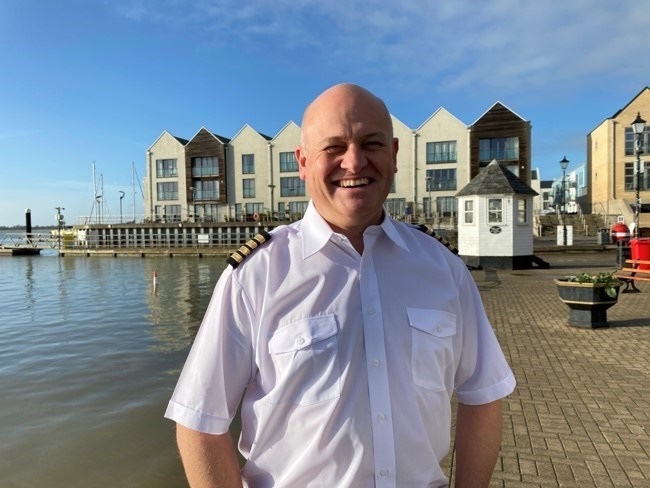 Dart Harbour & Navigation Authority are pleased to announce the appointment of a new Chief Executive Officer & Harbour Master. Captain Geoff Holland MN will take up the appointment as of the 1st February 2021.

Following the retirement of Captain Mark Cooper RN in 2020 a thorough and intensive recruitment process was commenced to find the Authority a new leader.

Competition for this prestigious role was tough with over 100 applicants applying for the job coming from a range of backgrounds but Capt Holland stood out and demonstrated all the required skills to take on this rewarding and challenging role.

Capt Holland comes from a Ports and Merchant Navy background having previously held roles as Harbour Master at both Tilbury in Essex and Felixstowe in Suffolk. During his time as Harbour Master he helped oversee several major projects including the Felixstowe port expansion and significant flood defence works on the Thames.

Before coming ashore, Capt Holland held senior positions in two of the UK's largest shipping companies, Stena Line Ferries and Saga Cruises. He also served with John Swire and Sons and P&O Princess Cruises as well as holding a voluntary board member role for a Trust Port in Essex.

"I see this as a great opportunity and privilege to be offered the position of CEO and Harbour Master for Dart Harbour. Having been to many harbours around the world the River Dart always stood out as one that I would like to one day be in charge of, I think the river and the surrounding countryside are beautiful and I'm very much looking forward to becoming part of the local community. Starting in the New Year, I hope to meet as many of the users and groups that use Dart Harbour, and to carry on the good work that both Mark and Rich have done over the last few years."

"We are delighted to have been able to recruit such a capable and experienced Harbour Master as Geoff and look forward to working with him for the foreseeable future to further Dart Harbour's vision: to manage, protect and enhance the River Dart as a safe and thriving asset. 2020 has presented some significant challenges for us all, and we are confident that under Geoff's management and leadership, we can expect in the years to come that our operations will be as smooth and professional as our stakeholders would wish.".

Capt Holland takes up his role on the 1st February 2021. Until this time Capt Rich Eggleton MN will continue as Interim CEO/HM. Capt Eggleton will then assist Capt Holland during the transition period to allow him time to become familiar with the Harbour, Stakeholders and Operations.